„Computer, Open That Door!“ is a small game piece I made in cooperation with Paul Lawitzki (http://plaw.info/) for the Ludum Dare #30 Jam. We had 72 hours to finish a game for the jam.
Our idea was to create a scenario in which the player takes the role of a space ship computer who took over the control of the internal ship systems to get rid of the crew.

We had a ton of ideas for this game which didn’t make it into the final build because we ran out of time. Both of us would like to work further on the concept and create a game with more mechanics based on the rogue computer idea. 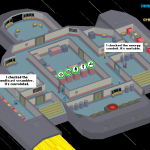